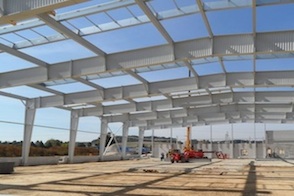 PEM built a new production hall for the Knauf Group in Bavaria in the shortest construction time. PEM used the economical and innovative double-joint frames of the PEM system involving the SIN corrugated web beams for the unsupported frame span of an impressive 54 metres. SIN beams (corrugated web beams) were also used as secondary supports with a distance of six metres. The sheet metal supporting deck was relocated over the purlins from the ridge to the eaves. Thus, the “sealed” hall could be handed over to interior fittings after a construction period of five weeks.