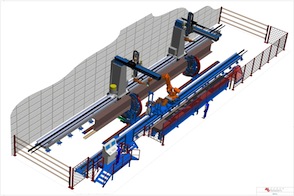 ZEMAN Bauelemente was able to record an international success in North America. The Canadian steel construction company STEELCON, based in Toronto, has ordered a system with the type designation “SBA compact”, which has been developed specifically for this market. With tried and tested technology, more competitive prices and decisive production advantages, ZEMAN Bauelemente was able to assert itself against the local Canadian competitors.

STEELCON shall put the revolutionary “SBA compact” system into operation for the first time on the date of next year’s North American Steel Construction Conference NASCC, which will take place in Toronto in March 2014. The advantages of the “SBA compact”: