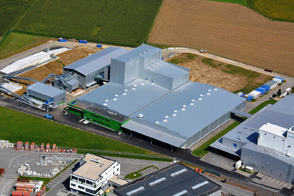 Zeman and Co celebrates with Saatbau Linz the opening of the new maize seeds facility in Geinberg.

According to the press release of Saatbau Linz, it puts “in the early September one of the most modern in Europe … maize seeds facility into operation. With this facility built in record construction time in Geinberg, Austria, the SAATBAU LINZ doubles its production capacity to 1.1 million of seeds packages“.

The first facilities in Geinberg / Upper Austria, were built in 2006 by Zeman & Co for the Saatbau Linz, one of the most successful agricultural Austrian cooperatives. 2009 followed another first building stage – also under collaboration of Zeman & Co. In late autumn of 2013 Zeman & Co has been ordered with the construction of warehouses, a de-leafing facility for maize cobs and production plants, of claddings of the dryer plant including all plumbing work and smoke and heat venting system.

Cimbria Haid, who is responsible for the entire facility formation, transferred during the project flow the plant steel construction and the steel structures of the conveyor bridges also to Zeman & Co.

Due to the size and the short time available, the performance within the ZEMAN GROUP was increased through the close cooperation between Zeman & Co and PEM GmbH from Mauthausen.

ZEMAN as a reliable partner in the field of steel construction, building construction, cladding and plant construction convinces throughout the years also in Geinberg and in Neuhof meeting the schedule and cost budgets, and this has proven this once again in maize seeds facility in Geinberg No 3.