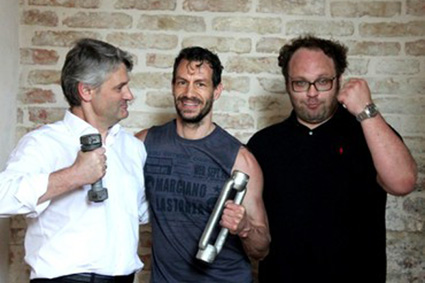 Challenging, large steel constructions are the specialty of Zeman and Co. Football stadia, railway stations or the 360 degrees observation station “Ice Q” on the Gailachkogel (seen in the last James Bond – Spectre) represent the scale of the projects that Zeman and Co. normally undertakes.

This time however a special construction was sought after that required particular know-how, in the BOXPALAST of the personal trainer, Karim El-Sayed, a rod construction as flexible system, that among other things enabled the fixing and mounting of several TRX force stations, boxing sack, rings, diverse supports and of course exercises in dizzy heights. The employees from Zeman & Co assembled an ingenious construct on the wall for the BOXPALAST. “Zeman & Co is now one of my main outfitters, because my trainees have already been using the turnbuckles for a long time in training” stated Karim El-Sayed, personal trainer in the Boxpalast.