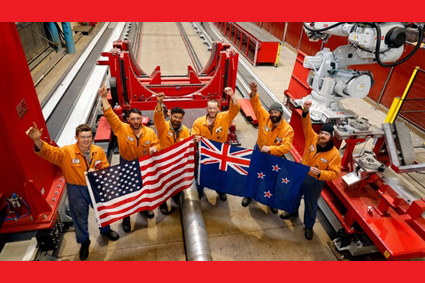 Investments in Zeman machines pay off. CULHAM Engineering, based in New Zealand / Whangarei, was able to accept one of the largest steel construction contracts that has ever been awarded in New Zealand, not least due to the purchase of a fully automated steel beam assembly system (SBA).

For the SkyCity – Convention Center, 8,500 tons of steel will be installed over the next few years.

Apart from that, another prestigious project was awarded to CULHAM Engineering in 2016: New Zealand’s most exclusive office building in Auckland’s business quarter – Commercial Bay – a 192m high office tower, consisting of 37 floors and 6,500 tons of steel.

Mr. Kirwan said, the company had had its eye on the job for several years and had purchased “millions of dollars” of equipment in readiness. “We went out and invested. We know there’s no one else in the country now that has what we have” – Mr. Kirwan, Culham Engineering.