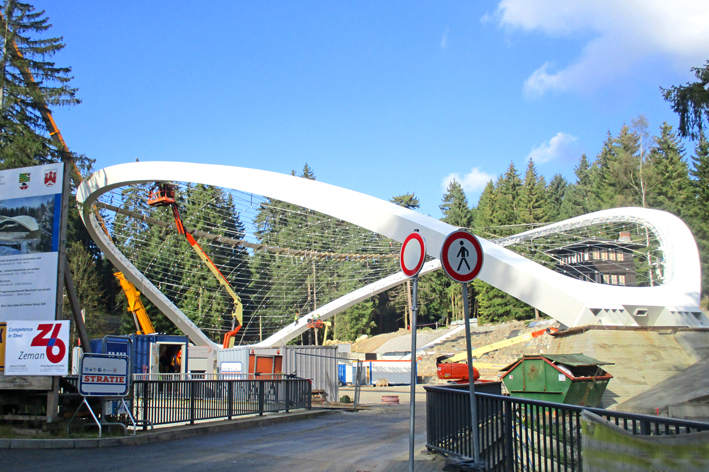 After sofisticated precision work on construction of the bearing structure of the Feuerstein-Arena the project was completed in time and to the customer’s fullest satisfaction.

The Feuerstein-Arena (tranls. “Flintstone-Arena”), named not after the Flintstone family, but after the local herbal bitter, is being built since May 2016 as a new multifunctional arena in the Schierke district of the city Wernigerode in Saxony-Anhalt, Germany

Already since 1911 this place was used as an ice rink. Later, the rink was replaced by the “Natural Ice Stadium” dedicated to the “1. GDR Championships in Winter Sports 1950″.

At the beginning of 2013 a European architectural tender was announced for the reactivation and redesign of the historically protected Ice Stadium.

The opening of the new arena is planned for December 2017.

„The Arena is a central component of the local and tourism development in Schierke. By the planned 25 x 56 m large artificial ice surface and the cold plate built into the ground the ice skating should be possible in the winter months in a weather-independent way. The roof is designed like a potato chip, 15 meters high and consists of a glass fiber membrane. The visitor area remains without roofing. Additionally two functional buildings are planned, which will be used for the skate rental, bistro, WC and dressing rooms as well as storage and for refrigeration equipment.
In the summer months starting from 2018 the arena will be used for concerts and other cultural or sports events.“

Fabrication and delivery of foot parts.

Anything that should exist longer needs a good foundation.

Two massive foot sections for the new Feuerstein-Arena in Wernigerode were manufactured in the Zeman production facility in Poland (Zeman HDF).

The parts are 10.5 m long and 4.2 m wide each and had to be delivered to Germany with special transports.

They were assembled out of the bent 50 mm sheet metal. A particular challenge was to bend and position the thick plates so precisely that the final geometry coincides exactly with the engineering requirements.

Now the parts weighing 41 tons each have been installed on the site and offer a good basis for further works.