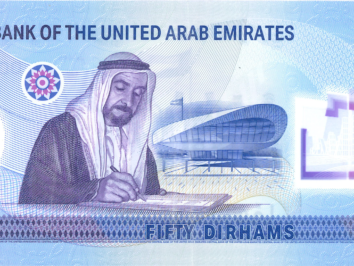 Etihad means Union in Arabic. The museum was built to celebrate the 45th anniversary of the 1971 unification agreement which brought together the United Arab Emirates with a fascinating parabolic curved facade, designed to resemble and represent the parchment upon which the unification agreement was signed. To commemorate the 50th ... anniversary of the nation’s founding the United Arab Emirates has introduced the new 50 dirham note made of polymer, which depicts on the front side the UAE’s founding father Sheikh Zayed bin Sultan signing the union document and the Etihad Museum. But why use monuments? Around the world, countries have used some of their oldest or most recognisable buildings on their currency notes, to remind citizens of their heritage and history.
The Etihad Museum is a unique museum complex. Waagner Biro constructed the impressive visitors’ pavilion. The bright, curved roof designed by architects Moriyama & Teshima, modeled as a white parchment scroll. The load-bearing structure of the approximately 2,000 m² two-storey pavilion is composed of a 950 tonne primary and secondary steel structure and is supported on the ground floor by the underlying reinforced concrete structure. The total of 21 supports, inclined at 21 degrees from the vertical, bear the curved roof structure and the upper storey of the pavilion. Owing to the extremely short period of less than 10 months allowed by the schedule for the planning, fabrication and construction of the entire pavilion, it proved necessary to optimise the cladding for the steel structure for faster fabrication and assembly. Thanks to the holistic approach adopted by Waagner-Biro, it was possible to realise this globally unique inclined glass-fin façade within an extremely short fabrication and construction period. A project under such “fast-track” circumstances requires considerable experience and a high degree of expertise – which Waagner-Biro was able to impressively demonstrate in the successful realisation of the visitors’ pavilion for the Etihad Museum. The Etihad Museum was awarded the prestigious “Best New Museum – Middle East” at the Leading Culture Destinations Awards 2017.