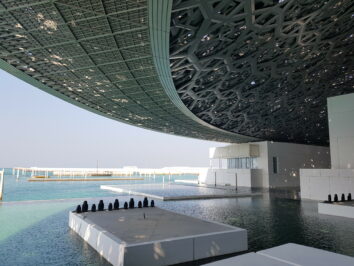 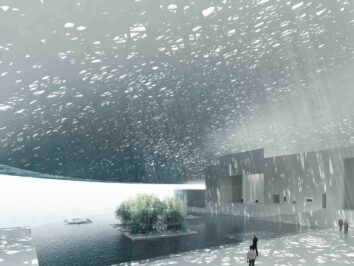 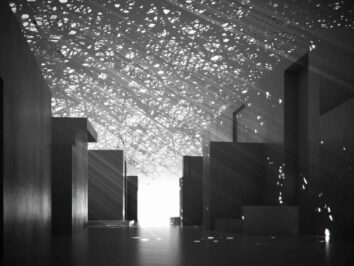 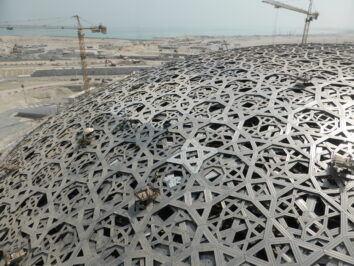 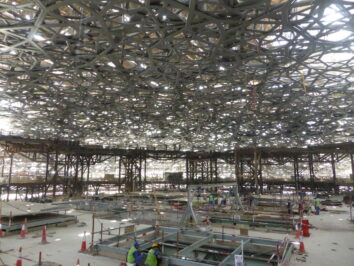 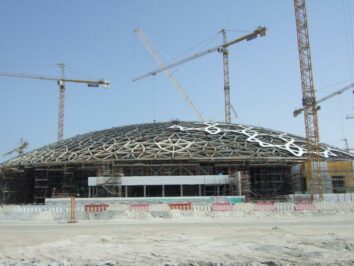 As the first outpost of the Musée du Louvre outside France, Louvre Abu Dhabi stands on the waterfront of Abu Dhabi’s Saadiyat Island, a man-made island on the coast of the United Arab Emirates capital with a shallow dome spanning 180 metres over the art museum buildings below. Almost 8,000 ... light points are created by the overlapping geometries of the dome façade elements and structure, allowing the light to filter through the randomly occurring perforations to create the ‘rain of light’, which are beams of sunlight bursting through the dome and dance along the white frontages of the interior buildings. The dome, constructed by Waagner Biro Steel and Glass, is 180 meters in diameter. The open dome construction is a steel construction the size of five soccer fields. The entire dome is supported at only four points, which adds to its floating appearance but also the technical and engineering challenge. The top and bottom layers of the dome are covered with four levels each of criss-crossing, differently sized aluminium profiles, each forming lattice structures with arabesque patterns. By twisting and shifting the patterns, the clear geometry dissolves and transforms the construction into a seemingly chaotic tangle, resembling a starry sky. This special use of the natural light (referred to as “Rain of Light”) was also the inspiration of the French, Pritzker prize winning architect Jean Nouvel. His intention was to create a setting which with echoes of an oriental bazaar. For the Louvre Abu Dhabi project, Waagner Biro Steel and Glass was awarded the European Steel Building Award in September 2017.