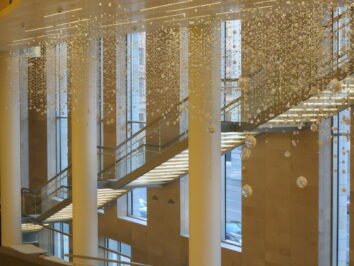 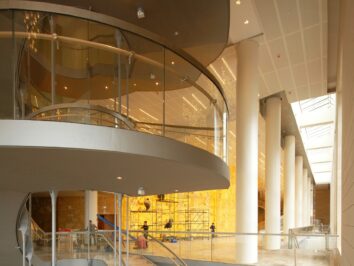 The name Mariinsky Theatre is worldwide known for masterful opera and ballet productions. On the order of Empress Catherine the Great, it was opened in 1783 as the Bolshoi Theatre. Despite destruction during the war and modernisation the building kept its original splendour. The design of the Canadian architects Diamond ... Schmitt was elected as the winning entry of an international architectural competition for an extension of the theatre. With its stone façade the new building perfectly fits into the historical block development. However, the simplicity of the building does not lead to less imposing spaces. Particularly the multi-storey foyer impresses with its extravagant size. Waagner-Biro realized a large number of its circulation elements that enable the guests to reach their seats or simply to enjoy the view. In addition to the single, straight and dog-legged stairs Waagner-Biro realized one suspended oval staircase connecting several floors, one glass stair with about 35 meter length as well as a footbridge for VIP-guests.