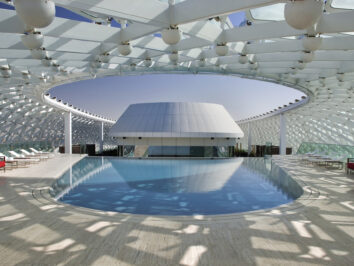 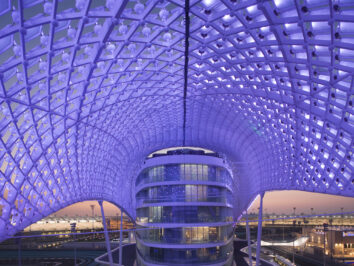 Situated right on the new Formula 1 circuit in Abu Dhabi, the Yas Marina Hotel offers the racing drivers an impressive sight. The “grid shell”, a free-form surface of steel and glass which spans the hotel and parts of the track, has a unique appearance. The design, a vision of ... the New York firm, Asymptote Architects, was inspired by terms like speed, motion, elegance and spectacle. This inspiration was developed by Waagner-Biro to create a steel and glass structure which radiates ease and elegance. The free-form surface settles over the multistory hotel like a reptilian skin. It rests on only a few V-shaped supports, even though it consists of 2,800 tonnes of steel and 5,100 glass panels. To produce this delicate appearance, each of the 10,700 individual rods had to be as thin as possible – a task that only a few suppliers in the world are capable of. If that wasn’t enough of a challenge, the project was also under extreme time pressure. From the rough sketch of the architect’s first idea, to the project’s completion, took only 18 months; 18 months in which all the technical solutions were developed and implemented by Waagner-Biro.